MYF from the north

There were any number of as-interesting flights over the next 37 years. Maybe I’ll compile them all in another section on this site. Interested? Oh, wait, you can’t comment on the blog – heh, heh. Drop me an email listed in the “Contact Us” menu on the home page. 41 years and 10,000 hours of G/A thrills. Who’d-a thunk it? Let me know if you’d like to read more.

What did I do for hour 10,000, you ask? Took Laurel up for a small tour of our SAN airspace, bouncing down at CRQ, RNM, SEE and, just overtop of MYF the meter clicked forward: 10,000 hours. Who better to share that special time but the best person I know. 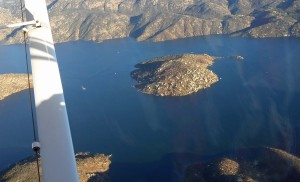