Decathlon 62973, model 8KCAB, was built in 1972. She is the prettiest airplane I ever saw and, when I saw her in person, I bought her. Her patriotic red, white and blue colors, her stars and her stripes make her the envy of the airport. She is a decent tailwheel trainer requiring a tad more attention to speeds on final approach than her easier-landing little brother, the Citabria. That’s because she possesses a semi-symmetrical wing – which means she flies almost as well upside down as she does right side up. But, if you learn in a Decathlon, you’ll make an easy transition to the Citabria. She is a basic aerobatic trainer and is a dream to fly with her aileron spades and large flight control surfaces. She is a joy.

Sadly, she was destroyed in a microburst that hit Montgomery Field on 16Sep2014. We held an Irish wake for her at the Stearman Ale House a week and a half later, and the turnout would have made her proud. RIP 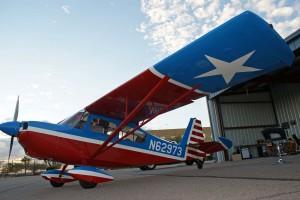