Stearman 65845 was built by Boeing in Wichita, Kansas in 1941 as a model A75-N1. Boeing had bought Stearman Aircraft Corporation from its founder, Lloyd Stearman, who had designed the Travel Air open cockpit biplane flown by my former employers, Barnstorming Adventures. The Kaydet, as it was sometimes called, was the primary trainer for anyone who flew in World War II. Before you flew a P-51, -47, -40, -39 or -38, before you flew a Wildcat, Hellcat,  Bearcat or Corsair, before you flew a B-17, -24, -25, -26 or -29, you first flew a Stearman.

My partners found Stearman 65845 for sale in Mesa, Arizona and bought her while I was out of town so I didn’t get a chance to fly her back home. Before my wife and I returned from our trip that weekend, however, our first stop was at the airport to meet our new airplane. Although I had nearly 1000 hours of biplane experience, I’d never flown a Stearman so I had to get a check out from my good friend and spectacularly good and experienced instructor, Bob Turner. After we started her up, Bob asked what I wanted to do first. “I wanna see how she flies slow,” I said. “I wanna know how she stalls, how she glides and how she flies before I try to figure out how to land her.” He chuckled. “You’re gonna love the stall,” he said. “The top wing stalls after the bottom wing, so before the stall break the ailerons in the bottom wing start to flutter. It’s a scream.”

She is a dream to fly. She flies even prettier than she looks and she’s the prettiest airplane at Montgomery Field. (Please don’t let my Decathlon know that I wrote those words.) She has no evil flying characteristics, recovers from a stall beautifully, handles cross winds extremely well and comes equipped with shock absorbing landing gear, so it’s almost impossible to bounce her back into the air – unless you really pound her into the runway.

Sad to say, I’ve had to sell my share in the Stearman. The wonderful folks at Nordstrom (that’s sarcasm, in case you’re unfamiliar) decided that Laurel’s services were no longer needed after 27 loyal years of service. A Stearman becomes a luxury when the only employed person in the household is a flight instructor. 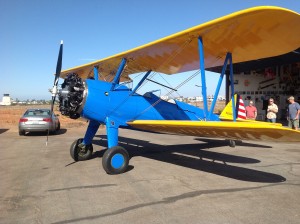